WVU beats Texas in the 1st Round of the Big 12 Tournament!! #WQBENightShow

KANSAS CITY, Mo. — Jevon Carter scored 21 points, West Virginia cranked up its trademark defense and the No. 11 Mountaineers cruised to a 63-53 victory over Texas in the Big 12 Tournament quarterfinals Friday night.

Playing almost the entire way for a team that regularly goes 12-deep, Carter poured in five 3-pointers and added three rebounds and three assists. And that was almost enough to single-handedly send West Virginia into the semifinals Friday against ninth-ranked Baylor or Kansas State.

The No. 2 seed Mountaineers (25-7) forced the Longhorns (11-22) into 14 turnovers, heled them scoreless for the final 5:34 of the game and turned freshman forward Jarrett Allen into a non-factor on offense as they avenged a loss to Texas in the quarterfinals of the 2014 tournament.

Andrew Jones had 13 points to lead Texas, which matched a school record with its 22nd loss.

The No. 10 seed Longhorns, who rallied past Texas Tech in the opening round to snap a seven-game skid, managed to forge a lead midway through the first half despite digging an early hole.

But the Mountaineers’ in-your-shorts defense began to pay off with turnovers, and they went on a brief run into the locker room. Then, they extended their 39-30 advantage to as many as 13 points in the second half, taking a 47-34 lead when Sagaba Konate threw down a dunk with 15 minutes to go.

Kerwin Roach Jr. stopped the run with a 3-pointer, and by the time Mareik Isom scored a few minutes later, the orange-clad Longhorns had closed to 47-41 with 12 minutes left.

But try as they might, the Longhorns couldn’t climb all the way back.

Carter’s fifth 3 off a steal by Nathan Adrian pushed West Virginia’s lead back to 57-46. Adrian’s put-back a couple minutes later made it 61-51. And the Mountaineers’ defense did the rest, preventing the Longhorns from getting any good looks in the game’s closing minutes.

Texas extended its season by a day with its win over the Red Raiders, but now the offseason begins for coach Shaka Smart and Co. His 20-13 record in Year 1 is already a distant memory.

West Virginia has not won a conference tournament title since 2010, when the Mountaineers were still in the Big East. They lost to Kansas in the Big 12 title game last year.

Texas heads back to Austin to enjoy next week’s SXSW Music Festival.

West Virginia gets ready for another Big 12 semifinal. 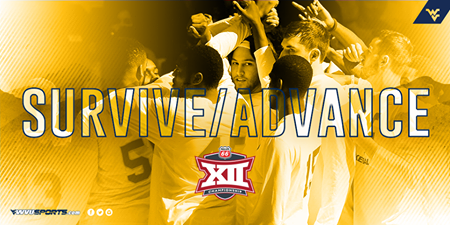