BUFFALO – Tarik Phillip scored 16 points, including six straight from the free throw line inside of a minute to play, to help fourth-seeded West Virginia hold off 13th-seed Bucknell, 86-80, in an NCAA Tournament first-round game here at KeyBank Center in Buffalo.
The Mountaineers now move on to face No. 5-seeded Notre Dame on Saturday. The Irish survived to defeat 12th-seeded Princeton, 60-58, in today’s first game.
“We weren’t very good today in pressure,” West Virginia coach Bob Huggins said. “(Nathan Adrian and Jevon Carter) were pretty good but the rest of the guys called it off way too early.”
West Virginia (27-8) jumped out to an early 15-point lead, 27-12, when Lamont West’s drive to the basket capped a 13-0 run.
But Bucknell (26-9) was able to hang around because of the inside scoring of 6-foot-9-inch, 230-pound, junior center Nana Foulland and the outside shooting of sophomore guard Kimbel Mackenzie.
Two Mackenzie free throws reduced Bucknell’s deficit to eight, 29-21, and the Bison eventually got it down to three, 36-33, on an Avi Toomer layup with 3:24 remaining.
For the remainder of the first half West Virginia held the Bison scoreless.
A Brandon Watkins follow-up basket gave the Mountaineers a 39-33 lead, and West completed the half with a driving layup off a steal from Jevon Carter.
The Mountaineers began the second half going inside to Elijah Macon, who scored close to the goal while being fouled by Foulland. His three-point play pushed WVU’s advantage to 12, 45-33, but immediately Bucknell scored seven straight to make it a five-point game.
An Esa Ahmad tip-in basket, a Macon jumper and then a West 3 pushed the margin back to 11, 52-41, with 16:40 remaining.
Again, Bucknell battled back to outscore the Mountaineers 16-8 over the next five minutes to make it a three-point game, 58-55, and requiring Huggins to call timeout.
An important moment in the game came with 9:37 left when Foulland was called for his fourth foul as Carter was making a move to the basket. Foulland sat the next five minutes on the bench as West Virginia was able to build its lead to eight, 76-68, on Carter’s 3 -West Virginia’s final field goal of the game.
“Foulland is a good player,” Huggins said. “He’s really good in any league. He’s athletic, and not just on the offensive end. He changed so many shots. He really disrupted us offensively with his shot-blocking ability.”
Following Carter’s 3, Phillip took over at the line by getting free throws to go down at 1:00, at :41 and :26 to keep the margin a reasonably comfortable three-possession game.
“Coach has been telling us for the longest while that turnovers and free throws are going to be the death of us, so if we limit turnovers and make free throws, we’ve got a chance of winning,” Phillip said.
West Virginia grabbed 17 offensive rebounds and had a 10-board advantage on the glass, attempted seven more shots than Bucknell and outscored the Bison 37-5 off the bench.
Ahmad and West contributed 15 each, Adrian scored 12 and grabbed 10 rebounds and Carter contributed 11.
Mackenzie led all scorers with 23 while Foulland finished with 18 points and seven rebounds.
“What Bucknell did was make shots,” Huggins said. “They don’t always make shots that well – nobody does, Mackenzie was five for seven from 3 and Steven Brown hit some big 3s. It seemed like every time we started to get away from them a little bit, they made a 3.”
“I think switching on the 1-3-1 today helped us a lot – kind of slowing down their drive a little bit,” Adrian said. “That’s an effort thing. Between now and Saturday we have to get our heads right and play defense like we know how to.”
A crowd of 17,806 was announced for today’s first session.
Tonight’s game in the other region features top-seeded Villanova playing Mount St. Mary’s and then the 8-9 game between Wisconsin and Virginia Tech.
A tip time for Saturday’s Notre Dame game will be announced by the NCAA later this evening.
Tournament Notes:
* West Virginia improves to 28-27 all-time in NCAA Tournament action, including a 9-8 record under Bob Huggins. Today’s victory was Huggins’ 30th in NCAA Tournament play, against 22 losses.
The Mountaineers are now 3-0 at this site, with prior wins over Morgan State and Missouri during the 2010 NCAA Tournament.
The victory over Bucknell is West Virginia’s ninth against no defeats all-time against the Bison.
* West Virginia’s 27 victories match 1982 and 2008 for the third-most wins in school history. The 2010 team won 31 games on the way to the Final Four. West Virginia’s other Final Four team in 1959 won 29 games. This is the third straight year the Mountaineers have won at least 25 games in a season.
* The Big 12 now improves to 2-0 in early NCAA Tournament games with Kansas State knocking off Wake Forest on Tuesday night.
* WVU’s 86 points are the team’s most in the NCAA Tournament since a 102-72 victory against North Carolina A&T in the 1982 first round.
* Following Nathan Adrian’s two missed free throws with 14:43 remaining, West Virginia finished the game making 15 of their final 18.
* Jevon Carter’s 11 points tonight gives him 1,073 for his career, moving him past Dave Reaser into 43rd place in school history.
* Tarik Phillip remains West Virginia’s leading active scorer in NCAA play with 42 career points in five tournament games. Carter is now second with 39 career points, also in five games.
( Credit to WVUSports.com ) 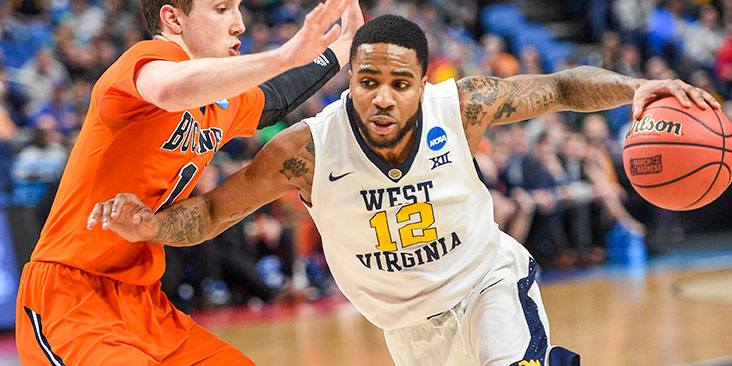