In a hilarious Instagram post, the Super Bowl LI champion posted a picture of a makeshift suspect board with persons of interest on Wednesday.

Among the notable suspects are Lady Gaga, who performed the Super Bowl halftime show at Houston’s NRG Stadium, and teammate Julian Edelman, whom Brady calls out in the caption.

“Ya suspect, yeah you!” Brady said in the post referring to Edelman. “I don’t know what your reputation is in this town, but after that s@?# you pulled, you can bet l’ll be looking into you!”

The jersey, which police estimate is worth up to $500,000, disappeared from the Super Bowl MVP’s duffel bag inside his locker following the Patriots’ overtime victory against the Falcons. The NFL apparently narrowed down the time frame of the swipe to a 15-minute period. Both the Texas Rangers and Houston Police Department have been involved in an investigation to track down the missing jersey.

Other suspects include Gollum from “Lord of the Rings,” Jaws, Creepy Tom Brady from his Deflategate court drawing, and Swiper from Nickelodeon’s “Dora the Explorer.”

Surprisingly, Roger Goodell is not a suspect, according to Brady. 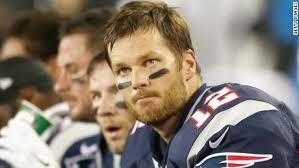