Adam West, the star of the classic 1960s Batman television series, has died at the age of 88 after a short battle with Leukemia.

“Our dad always saw himself as The Bright Knight, and aspired to make a positive impact on his fans’ lives. He was and always will be our hero,” his family said in a statement.

West became an icon by playing the Caped Crusader on ABC’s Batman television show, which became a surprise hit when it premiered in 1966. West’s Batman is known for its campy humor and though the character has taken a darker and more serious tone over the decades, the television series remains a fan favorite.

West celebrated the 50th anniversary of Batman with a guest appearance on the 200th episode of The Big Bang Theory. West reprised his role as the Dark Knight by voicing Batman, alongside his co-star Burt Ward as Robin, the 2016 animated movie Batman: Return of the Caped Crusaders.

The Batman television series has waxed and waned in its popularity with fans. It was beloved by children and adults when it first aired but was unloved by fans of Batman comics because they felt the series treated the material as kid stuff. However, the stylized, kitschy take on Batman has seen a resurgence in popularity in recent years as Warner Bros. has begun releasing new merchandise based on West’s Batman and a digital Batman ’66 comic book featuring new adventures of television’s Dynamic Duo, even crossing over with The Green Hornet and Lynda Carter-inspired Wonder Woman ’77 comic book.

West’s interpretation of Batman also heavily inspired the Batman animated series The Brave and the Bold, which featured a bright and humorous Batman. West had a guest role on the series as Batman’s father, Thomas Wayne, in the episode titled “Chill of the Night!”

West made his feature film in The Young Philadelphians in 1959 acting alongside Paul Newman. He also appeared in the Three Stooges movie The Outlaws Is Coming. More recent roles including a recurring voice acting job playing himself as the mayor of Quahog on Family Guy and roles in The Happy Hooker, Hooper, The Rapture, and The New Age.

In the 1990s, West wrote the memoir Back to the Batcave which recounted his years playing Batman on television and how he was disappointed that he wasn’t offered the opportunity to reprise his role when Batman was brought to the big screen by director Tim Burton in 1989.

Adam West was born William West Anderson in Walla Walla, Washington in 1928. He took the stage name Adam West when he began his entertainment career in Hawaii in the 1950s, starring in local kids shows. 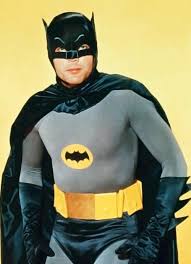