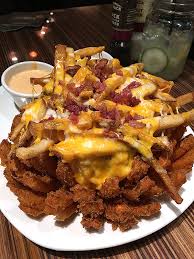 Outback Steakhouse’s Newest Bloomin’ Onion Will Consume Us All! It’s now being topped with Cheese and steak!  Dubbed the “3 Point Bloomin’ Onion,” it’s apparently being served in honor of March Madness, which makes sense considering it could likely subdue an entire college basketball team into a sodium-laden food coma.

And despite being touted as Aussie cuisine, Eater’s resident Australians say that actually encountering such a monstrosity Down Under is about as likely as seeing a koala in a Crocodile Dundee hat wrangling a kangaroo. “Most Australians have never heard of a Bloomin’ Onion, much less fried one up,” senior social media manager Adam Moussa clarifies. Further, he says “cheese fries are what you get at American places in Sydney,” and are not part of a typical Australian diet.

No, much like Guy Fieri and Skittles-fed cattle, this 3,000-calorie stunt food monstrosity is 100 percent Americana.