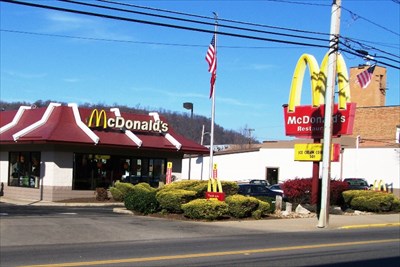 McDonald‘s is planning to offer $1 sodas and $2 McCafe drinks, and this bargain should bring more customers into stores, restaurant analyst Will Slabaugh told CNBC on Wednesday.

“The big guys with the largest bullhorn” are the ones that are able to make price cuts like this, Slabaugh, an analyst at Stephens, said during an interview on CNBC’s “Power Lunch.”

Burger King tried it with cheaper chicken nuggets and pancakes, for example, “but smaller chains can’t afford” to give customers a bargain, he went on. McDonald’s, though, can manage and should make money on dollar-priced drinks.

It’s all a matter of getting customers to “trade up” once they come in stores, Slabaugh explained.

Jonathan Maze, a senior editor with Nation’s Restaurant News, agreed with Slabaugh, saying: “You need some level of a discount to get people in the door … Frankly there are too many restaurants” in the market today.

Convenience stores have been discounting beverages for decades, Maze said, so why not McDonald’s? Beverages are where profit can be made, too.

“Discount food, and you make a loss,” Maze emphasized. Franchise owners will be much more “on board” with this deal — rather than a bargain-priced double cheeseburger — because drinks have a larger profit margin than beef or fries.

All-day breakfast has panned out well for McDonald’s, and time will tell if dollar-priced sodas and coffee beverages will drive more foot traffic to stores and entice customers to purchase more items, once inside, Slabaugh told CNBC.

McDonald’s just launched the Mac Jr., a cheaper version of its Big Mac, … “a dollar drink is along the same vein,” he said.