We’re still a month away from the FLOYD MAYWEATHER / CONOR MCGREGOR fight on August 26th in Vegas . . . but an online sportsbook has the latest odds and prop bets. Here are the highlights:

Mayweather is still the odds-on favorite to win, which makes sense because McGregor is coming to HIS sport to fight him. This is a boxing match, not an MMA fight. Mayweather’s odds are at 1-to-5, McGregor’s are 7-to-2.

The over-under on pay-per-view buys is 4.99 million. If that happens, it would shatter the record of 4.6 million set by Mayweather’s fight against Manny Pacquiao in 2015. Which didn’t end up being the best investment.

The odds of McGregor throwing a KICK during the fight are 11-to-1, which translates to just 8.33%. In order for ‘yes’ to count, he must be deducted a point or disqualified for kicking. 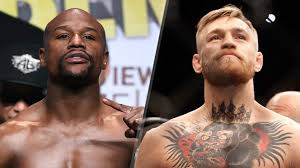