1st March 1954, Born on this day, in Cleveland, Ohio, was Catherine Bach, actress, known for playing Daisy Duke in the television series The Dukes of Hazzard that aired on the CBS television network from 1979 to 1985. The producers were looking for a Dolly Parton-lookalike; despite not looking like what they were searching for, she was hired on the spot. At the hight of the show a poster of ‘Daisy’ in her cut-off jeans sold over 5 million copies. 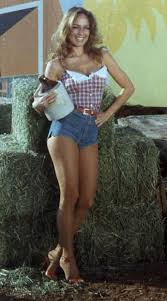